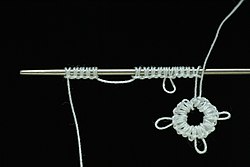 Needle tatting in progress. A completed closed ring of 5ds segments with a picot loop between each is shown. Another uncompleted loop is still on the needle.

Traditional shuttle tatting may be simulated using a tatting needle or doll needle instead of a shuttle. Although needle tatting looks similar to shuttle tatting, it differs in structure and is slightly thicker and looser because both the needle and the thread must pass through the stitches.This method originated in early twentieth century, but did not become popular until much later. A tatting needle is a long, blunt needle that does not change thickness at the eye of the needle. The needle used must match the thickness of the thread chosen for the project. Rather than winding the shuttle, the needle is threaded with a length of thread. To work with a second color, a second needle is used.